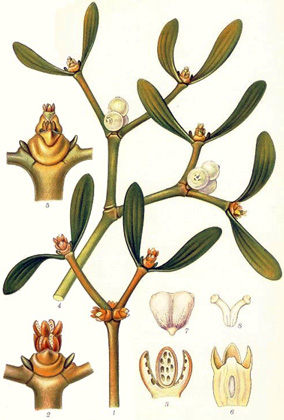 Think you know it all about Mistletoe?

Mistletoe is the common name for a group of hemi-parasitic plants in the order Santalales that grow attached to and within the branches of a tree or shrub. Parasitism evolved only nine times in the plant kingdom; of those, the parasitic mistletoe habit has evolved independently five times: Misodendraceae, Loranthaceae, Santalaceae (formerly considered the separate family Eremolepidaceae), and Santalaceae (formerly treated as the separate family Viscaceae). Although Viscaceae and Eremolepidaceae were placed in a broadly-defined Santalaceae by Angiosperm Phylogeny Group 2, DNA data indicates that they evolved independently.

The word 'mistletoe' is of uncertain etymology; it may be related to German Mist, for dung and Tang for branch, since mistletoe can be spread in the feces of birds moving from tree to tree. However, Old English mistel was also used for basil.

European mistletoe, Viscum album, is a poisonous plant that causes acute gastrointestinal problems including stomach pain, and diarrhea along with low pulse.

The name was originally applied to Viscum album (European Mistletoe, Santalaceae), the only species native in Great Britain and much of Europe. Later the name was further extended to other related species, including Phoradendron serotinum (the Eastern Mistletoe of eastern North America and also Santalaceae).

European Mistletoe is readily recognized by its smooth-edged oval evergreen leaves borne in pairs along the woody stem, and waxy white berries in dense clusters of 2 to 6. In America, the Eastern Mistletoe is similar, but has shorter, broader leaves and longer clusters of 10 or more berries. In the United States, Phoradendron flavescens is commercially harvested for Christmas decorations.

The largest family of Mistletoes, Loranthaceae, has 73 genera and over 900 species. Subtropical and tropical climates have markedly more Mistletoe species; Australia has 85, of which 71 are in Loranthaceae, and 14 in Santalaceae.

Mistletoe species grow on a wide range of host trees, and commonly reduce their growth but can kill them with heavy infestation. Viscum album can parasitise more than 200 tree and shrub species. Almost all mistletoes are hemi-parasites, bearing evergreen leaves that do some photosynthesis, and using the host mainly for water and mineral nutrients. However, the mistletoe first sprouts from bird faeces on the trunk of the tree and indeed in its early stages of life takes it nutrients from this source. An exception is the leafless quintral, Tristerix aphyllus, which lives deep inside the sugar-transporting tissue of a spiny cactus, appearing only to show its tubular red flowers. 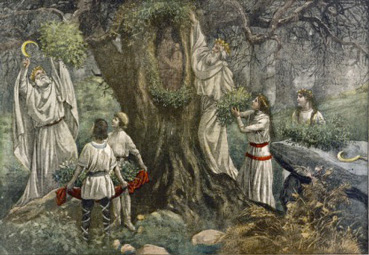 The genus Arceuthobium (dwarf mistletoe; Santalaceae) has reduced photosynthesis; as an adult, it manufactures only a small proportion of the sugars it needs from its own photosythesis but as a seedling it actively photosynthesizes until a connection to the host is established.

Most mistletoe seeds are spread by birds, such as the Mistle Thrush in Europe, the Phainopepla in southwestern North America, and Dicaeum of Asia and Australia. However, distinguishing between this species and ones of other ecological biomes is not difficult. They derive sustenance and agility through eating the fruits and nuts (drupes). The seeds are excreted in their droppings and stick to twigs, or more commonly the bird grips the fruit in its bill, squeezes the sticky coated seed out to the side, and then wipes its bill clean on a suitable branch. The seeds are coated with a sticky material called viscin (containing both cellulosic strands and mucopolysaccharides), which hardens and attaches the seed firmly to its future host.

Mistletoe was often considered a pest that kills trees and devalues natural habitats, but was recently recognized as an ecological keystone species, an organism that has a disproportionately pervasive influence over its community. A broad array of animals depend on mistletoe for food, consuming the leaves and young shoots, transferring pollen between plants, and dispersing the sticky seeds. The dense evergreen witches' brooms formed by the dwarf mistletoes (Arceuthobium species) of western North America also make excellent locations for roosting and nesting of the Northern Spotted Owls and the Marbled Murrelets.

In Australia the Diamond Firetails and Painted Honeyeaters are recorded as nesting in different mistletoes. This behavior is probably far more widespread than currently recognized; more than 240 species of birds that nest in foliage in Australia have been recorded nesting in mistletoe, representing more than 75% of the resident avifauna.

A study of mistletoe in junipers concluded that more juniper berries sprout in stands where mistletoe is present, as the mistletoe attracts berry-eating birds which also eat juniper berries. Such interactions lead to dramatic influences on diversity, as areas with greater mistletoe densities support higher diversities of animals. Thus, rather than being a pest, mistletoe can have a positive effect on biodiversity, providing high quality food and habitat for a broad range of animals in forests and woodlands worldwide.