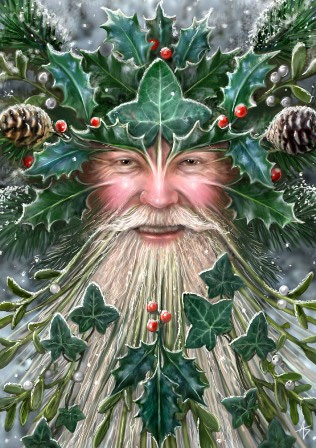 In many Celtic-based traditions of neopaganism, there is the enduring legend of the battle between the Oak King and the Holly King. These two mighty rulers fight for supremacy as the Wheel of the Year turns each season. At the Winter Solstice, or Yule, the Oak King conquers the Holly King, and then reigns until Midsummer, or Litha. Once the Summer Solstice arrives, the Holly King returns to do battle with the old king, and defeats him.

In the legends of some belief systems, the dates of these events are shifted; the battle takes place at the Equinoxes, so that the Oak King is at his strongest during Midsummer, or Litha, and the Holly King is dominant during Yule. From a folkloric and agricultural standpoint, this interpretation seems to make more sense.

Holly was considered a protective force against evil. Many prickly or thorny species were considered protective due to the fact that it was believed that evil thought forms or spirits would be caught up in their branches or unable to pass through the tree.

In Ireland the holly was called the "gentle tree" and the favourite tree of the fairies.

Holly Leaves of a female holly would be placed under the pillow to foresee the future in dreams.

At the Winter Solstice, and later on in time at Hogmanay people would decorate their homes with Holly branches to protect them from fairy mischief. It was considered OK to ask permission to take some cuttings from the tree as long as an offering of some sort was made (for example, leaving a piece of silver at the roots of the tree) but it was considered desperately unlucky to actually fell the tree.

People would also plant Holly around their homes where they would not only act as hedgerows but also protect the home and animals from ill luck or evil.

Many a holly tree was spared the woodman's axe in days gone by because of a superstition that it was unlucky to cut one down. This belief probably arose because of the tree's evergreen leaves and long lasting berries, leaving people to associate holly with eternity and the power to ward off evil and destruction.

The Holly was also considered a powerful tree due to the fact that it was an evergreen and could withstand the onslaught of the cold winter months.

The word Holly means holy and the Holly tree was considered sacred to the waxing year, or winter. The Holly Tree ruled in duality with the Oak tree, who ruled over the waning half of the year, or summer. 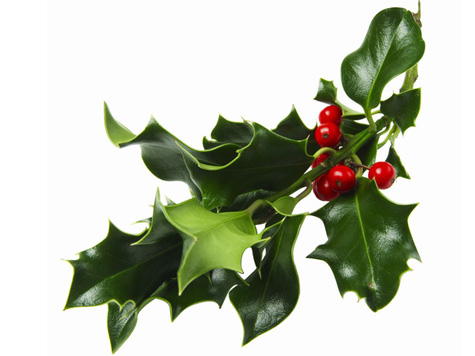 In old England, unmarried women would tie a sprig of holly or ivy to their beds to protect them from ghosts and evil spirits. It was believed that supernatural creatures were more active at Christmas time due to the loud screaming winter winds and the creaks caused by strong storms, and it was thought that the holly and the ivy had magical powers of protection. Since the holly and the ivy were protectors of women during pagan times, they were forbidden to appear inside the Christian home. For this reason, it was used to decorate the outside of the home, still serving to protect the home from evil spirits. The prickly thorns found on the holly took on the symbol of the crown of thorns that Jesus Christ wore during his crucifixion.

Some Christians believe that the holly berries were originally white, and that as Jesus Christ bled during his crucifixion, his blood colored the berries red. The green leaves of the holly plant represent the story his life while the red berries tell the story of his death. The circular shape of the wreath is a symbol that Christ has died, Christ has risen, and Christ will come again, a circular philosophy of life. In British culture, many traditions incorporate the Christmas wreath during the Advent season. Advent is a word derived from "adventus", the Latin word for arrival. It is the period of anticipation for the arrival of Christmas. In preparation, the wreath is laid flat on a church table top, with four candles (traditionally red) standing in a circular shape about the wreath. Each candle represents one of the four Sundays in Advent, with a fifth candle positioned in the center (traditionally white). The red Advent candles are lit every Sunday leading up to Christmas as a visual countdown. The white Advent candle is lit on Christmas Day.